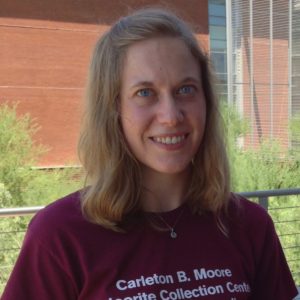 To Be or not to B: Meteoritic Implications for the Galactic Environment of Solar System Formation
Short-lived radionuclides (SLRs) once present in the solar nebula can be used to probe the Solar System’s galactic formation environment. Isotopic analyses reveal that the first solids formed in the Solar System, calcium- and aluminum-rich inclusions (CAIs) in chondritic meteorites, formed with the live SLRs 10Be (t1/2 = 1.4 Myr) and 26Al (t1/2 = 0.7 Myr). Beryllium-10 is produced when high-energy ions, solar energetic particles or galactic cosmic rays (GCRs), spall nuclei in gas or dust. The most likely source of Solar System 10Be is inheritance of GCR-irradiated protosolar molecular cloud material, but only if all CAIs recorded the same initial 10Be abundance. The goal of this dissertation is to assess the homogeneity of 10Be by measuring CAIs for 10Be–10B isotope systematics, correlated to 26Al–26Mg and oxygen isotopes. 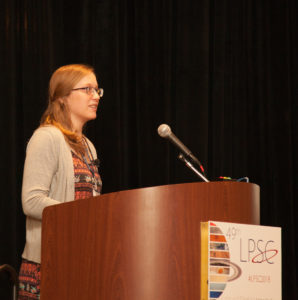 Dr. Dunham synthesized appropriate standards for secondary ion mass spectrometry (SIMS) measurements of 10Be–10B, necessary for accurate determination of the 10Be/9Be ratio. She then analyzed 32 CAIs for 10Be–10B as well as 6 CAIs for 26Al–26Mg and 5 CAIs for oxygen isotopes within this sample set, using SIMS techniques. Previous studies analyzed CAIs primarily from CV3 chondrites, which are known to have experienced thermal metamorphism and aqueous alteration. Dr. Dunham's work included a variety of CAIs (Type A, B, fine-grained, igneous) from CV3oxidized, CV3reduced, CO3, CR2, and CH/CB chondrites. Finally, after evaluating her data and literature data consistently, she statistically tested whether all CAIs belong to a single 10Be population. She found that the majority (~90%) of normal (i.e., without large isotopic fractionations or anomalies), 26Al-bearing CAIs recorded a single value, 10Be/9Be = (7.0 ± 0.2) × 10-4. Although 6 CAIs recorded higher or lower values, these are plausibly explained by secondary processes. The galaxy-wide average value of 10Be/9Be from GCR interactions 4.56 billion years ago is predicted to be <2 × 10-4; the value Dr. Dunham measured is more than 3 times higher. Because GCRs trace supernovae and star formation, her results suggest a similarly enhanced star formation rate in the molecular cloud within ~1 kpc of the Sun, in the ~15 Myr prior to the Sun’s birth.