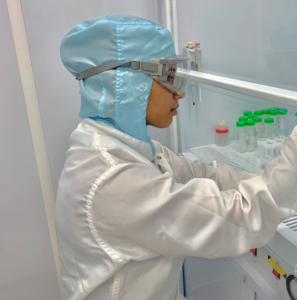 sotope Cosmochemistry and Geochronology Laboratory (ICGL) is one of only a few isotope laboratories in the U.S. dedicated to the analysis of meteorites. It consists of a 1,000 sq. ft. clean chemistry laboratory and a neighboring mass spectrometer facility.

Isotopic Analysis
Most chemical elements consist of more than one isotope (isotopes are atoms of a given element with a particular number of neutrons). 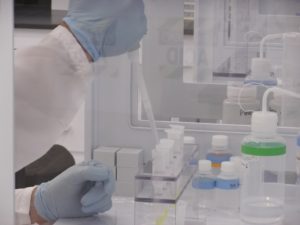 We measure the abundance of the radiogenic "daughter" products of short- (e.g., 26Al, 60Fe, 146Sm) and long-lived radioactive isotopes (e.g., 147Sm, 176Lu, 238U), relative to stable, non-radiogenic isotopes of the same elements to determine the age of a mineral or rock.

We also measure the mass-dependent fractionation of light from heavy isotopes as a tracer of processes that may have occurred during the early history of the Solar System, such as evaporation, condensation, and alteration processes. 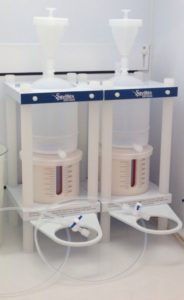 The lab also contains over 30 linear feet of ultra-clean laminar flow cabinets and hoods providing class 10 and better conditions. These are used to perform preparation and chemical processing of meteorite samples.

In addition, water used in our laboratory undergoes three different purification steps to bring the background concentrations of most elements down to the parts-per-quadrillion level (a quadrillion is 1,000,000,000,000,000).

Lastly, the acids we use to dissolve meteorites and for chemical processing of samples are distilled multiple times and contain only a few parts per trillion of most elements.

All of these precautions are necessary to make sure that data we produce are free of artifacts caused by terrestrial contamination in the laboratory.